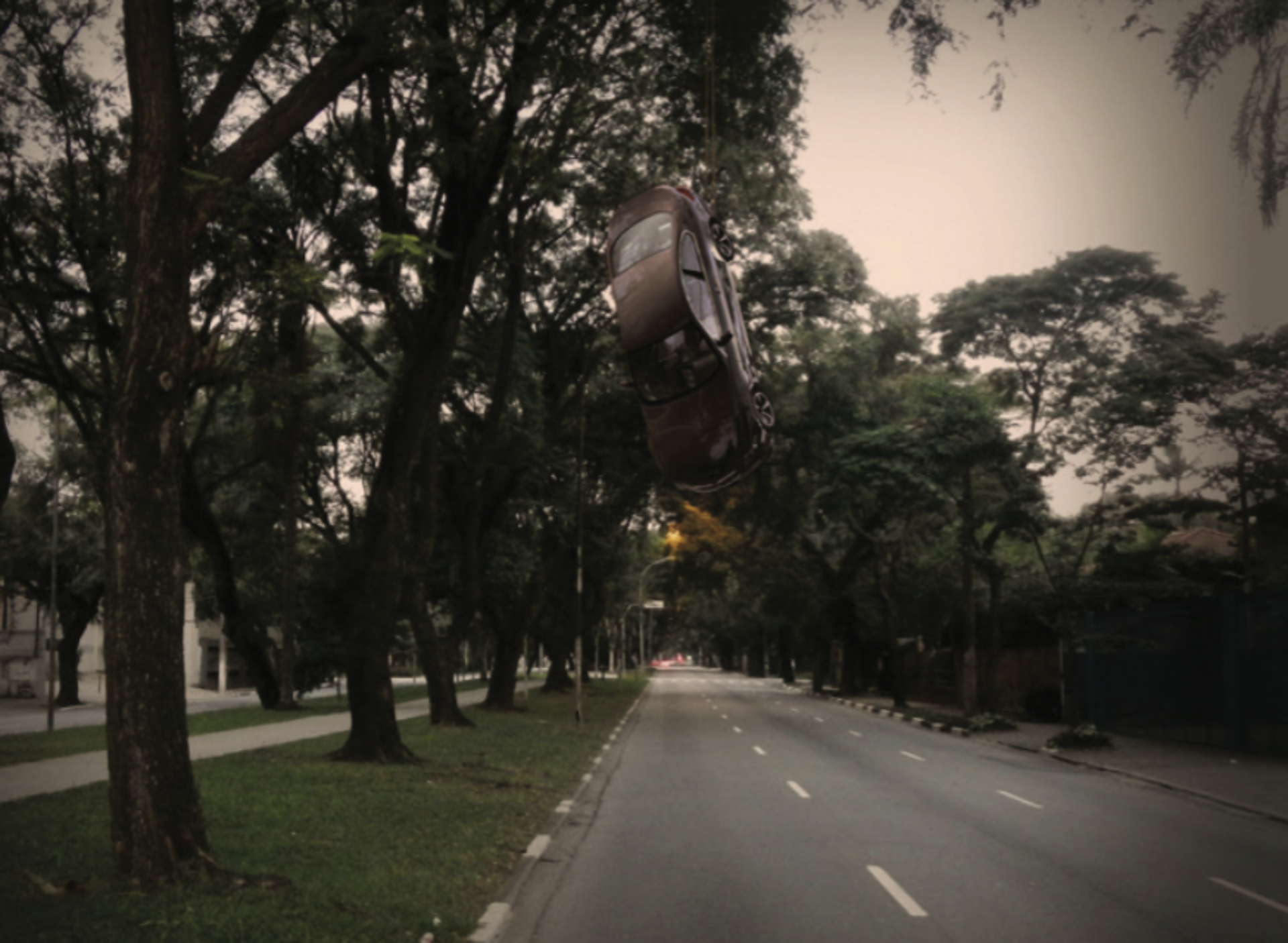 [this article was originally written in 2005 and published at first edition of arte.mov Festival, in 2006 – Portuguese version here] ]

Veridiana Zurita with Pharmakon group.
Performance in front of the squatted building at Prestes Maia Avenue, in São Paulo (2004) as one of several attempts to bring attention to the condition of 468 families being evicted due to a process of gentrification conducted in the city centre.

The recent proliferation of tiny cameras, now embedded in mobile phones have been leading to massive collections of supposed ‘warm moments’ that one would be likely to forget, feeding a sort of obsession on intimacy aesthetics. Like camera-enabled mobile phones, wearable computers, tactile media, location-based devices, instant messengers and voice over IP technologies (VoIP), they all attempt to offer an idea of comfort, a sort of ‘everywhere-privacy’ that can also be interpreted as intimacy. Rather than describing the technological instance (cellular), mobile phones encapsulate a notion of mobility, described as portable ‘temporary intimate zones’ (TIZ) by Matt Locke.[1] The term TIZ borrows references from TAZ (Temporary Autonomous Zone), coined by Hakim Bey referring to poetic events and actions that suggest subtle changes in the social reality aiming to a ‘more intense mode of existence’. But can we still think about intimacy as a terrain of intensity, pleasure, proximity, fruition or appreciation?

Not only privacy but intimacy spheres are going public. The emergence of the so called ‘intimate technologies’ has blurred even more the concepts related to intimacy, privacy and reality. Sara Diamond says: ‘The new technologies we use to enhance intimacy are also the very same ones being used to open up the social arena of discovery around once-private affairs’ (2002: 3). The current flood of seductive gadgets, loaded with promises of eliminating the distances between real life and its representational possibilities, they all bring in an ‘ideal’ notion of privacy, which would be the open door for an easy and ‘secure intimacy’. Devices designed for representation purposes, like cameras, also serve the purpose of attaching to our memory all those small details and warm moments that we are likely to forget.

A recent announcement by Microsoft emphasizes the extent to which the observation of the context of mediating technologies implies the focusing on technologies that affect our notions of intimacy and privacy.

Cool stuff you don’t know you need yet

SenseCam, touted as a visual diary of sorts, is designed to be worn around the neck. It can take images when there are abrupt movements, temperature fluctuations, variations of light or even changes in the wearer’s heartbeat, capturing moments of joy or tension of one’s life. Microsoft suggests that the diary can also help people to reconstruct scenes, remembering where an object was forgotten or special moments, such as a nice dinner. The diary is capable to take about 2.000 pictures automatically and works 12 hours a day.

Beyond its representation capabilities, the camera, which is still a prototype, suggests that the boundaries between private and public life really tend to disappear. The pervasive immersion of the camera in public environments would suggest the individual as a sentient ‘cyborg’, replacing any active participation in public life with a passive documentation about ordinary incidents. Is it good or bad?

Since personal information has become a valuable commodity, both privacy and intimacy turn out to be the most essential and recognizable icons of such value. As any commodity, intimacy features an aesthetically constructed significance, which becomes clear when it is connected to the idea of proximity or is a result of technological mediation processes (instant access to privacy).

Also, intimacy acquires new configurations and meanings according to the technological systems it is attached to. Distinct levels and shades of intimacy can be obtained differently by phone, by e-mail, through VoIP devices, by touching sensors or through webcams.

Such technological communication devices bring together the common aspiration to interface ‘realities’, not necessarily promoting any true participation or closer touch regarding the ‘outside’ space, in the sense pointed by Zygmunt Bauman in City of Fears, City of Hopes. They attempt to introduce the notion that reaching distant and separated ‘realities’ – often in-between private spheres – is the same of sharing experiences in public domains.

In North of Brazil some will believe that putting a bottle of water on the top of a electricity clock will drop the cost of electrical bills.

Nevertheless, far from providing any legitimate experience of involvement in public life, ‘the capability to connect’, or the feeling of participation suggested by communication advertisements seem to be what best describes their ideologies concerning the construction of realities.

As pointed by Maurizio Lazzarato, representation strategies play an important role in contemporary alienating progression. Thus, intimacy aesthetics are related to how separated domains are mediated, or as an effect of experiencing ‘reality’ as a mere aesthetic understanding, an intangible occurrence. Moreover, the representation of realities by means of its mediation, is already a fabrication, a form of replacement of a given ‘reality’ with ‘media realities’. To accept fabricated worlds as a real experience is to fall into the traps of representation, as the overwhelming abundance of images produced by the media each day may compromise what we deem to be ‘real’. To participate in a fabricated world of signs described by Lazzarato as if ‘constructed through statement-arrangement’ is not as the same as engaging in shared spaces of a city. Such technologies would not perforate the ‘bubble’ that separates these different ‘realities’, preventing the private-to-private sphere from reaching the city’s public spaces.

The project Cubo at Patriarca Square, in its first presentation weekend (2005)

Bauman sees our current society as a dystopia that has emerged in lieu of a model anchored somewhere between the totalitarian regimes of Orwell’s 1984 and Aldous Huxley’s Brave New World. This new dystopia is configured in a world of flow, ‘where social networks and collective action are irreversibly disintegrated as a side-effect to the rise of an evasive and slippery kind of power’. Social disintegration is not only a current condition but a result of such new power techniques.

As Brian Holmes affirms, new forms of power enforcements shape ‘societies that are deeply sick and which cover their pathological conspiracies with deliberate lies’.[3] Aspects once used to describe the end-of-the-century context still serve us to inquire about our current state of affairs.

Perfomance by GAC – Grupo de Arte Callejero at Paulista Avenue in São Paulo (2004) throwing messages to passers by on the streets.

Networked lifestyle within a technological society, where time has been compressed into a state of ‘eternal present’, have been pointed out by Trebor Scholz as ‘instruments of oppression and casualized labour that squeeze every last drop of energy and creativity out of the worker’.[4] A possible antidote against this scenario would be a commitment for a better analysis of the world around us. We need to think and feel’[5], says Scholz.

A consciously produced work of art offers analysis of the world around, it may lead us to ‘think and feel’. But how can new media-based art fulfil these tasks without being compromised by its own increasingly dependent structures on corporate technologies? Are artists bound to hermetically and endlessly discuss artistic authority and cultural politics, even when trying to break out of the bubble and inflict social change with their art?

To which extent the gaps between private-to-private affairs and the need of participation in public life is a typically socio-cultural syndrome? (related to cities such as São Paulo, Lima or Johanesburg, where one can not afford raw realities due to its wildly unequal class relations?) How much is it a typically reactionary position to consider that real life experiences must necessarily include ‘physical references’?

The project Motoboy (2006) still to be fully implemented in São Paulo by Antoni Abad was the starting point for the series Canales (2005-2006) at www.zexe.net.

The shifting boundaries between the private and public spheres, seen as a result of the spread of pervasive technologies, is not preventing the raise of dichotomies such as representation and mediation, ‘forged reality’ and social reality. As a challenging responsibility for artists committed to social reality, can we foresee new networks that would function as social interfaces, that would encourage individuals to re-enact participation in the construction of public-life? Can we find in these new systems the proper tools for producing awareness with regards to intrusive or alienating procedures? Will it work out to perforate the ‘bubble’ that prevents one to better grasp the world ‘outside’ of pervasive technologies?

It might be necessary to became aware of the art system’s contradictions and those in our own artwork. We shall have let ourselves be transformed by convictions constructed from experiencing the real spaces, mediation technologies and its traps. Among contradictions and conflicts we must feel the urgency as individuals – in Brazil or anywhere else – to put our ‘head and heart together’ (thanks Holmes!) in tune with the other, with the outside space and its ‘raw-realities’ so as to create new articulations, to generate empowerment, to stimulate actual collaborative and sharing actions.

[1] Matt has referred to TIZ in his speech at Intimate Technologies Conference, held at the Banff Centre in 2002.