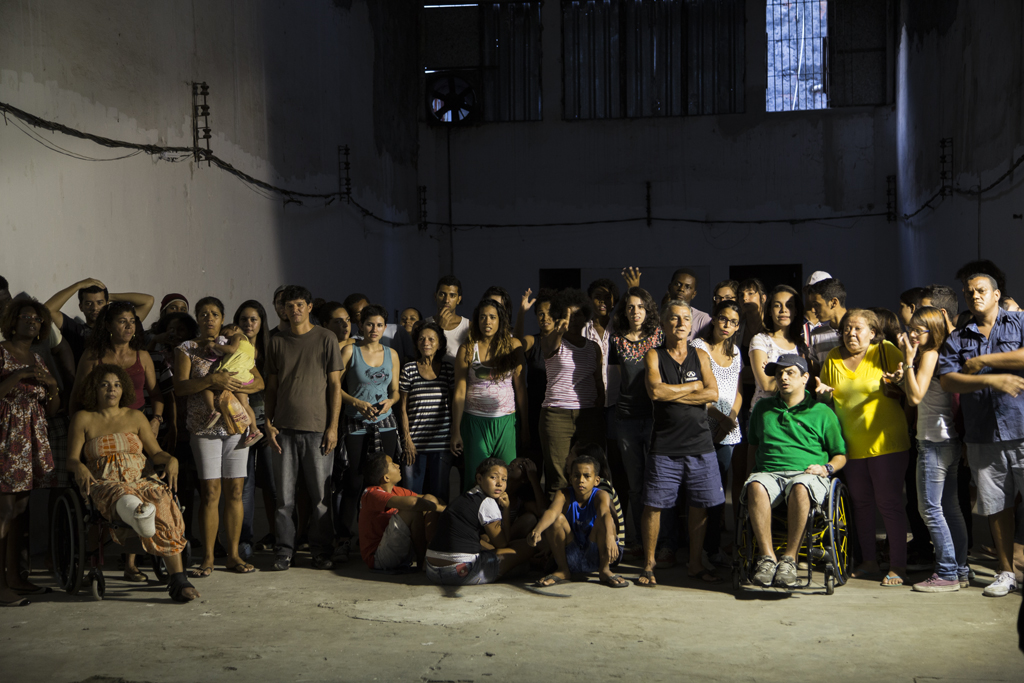 Spio is a ‘de-generative’ robotic installation. Originally designed as an autonomous system for capturing, processing and transmitting images, it has been re-implemented in a way that tracking cameras trigger responses on the robot itself, improving and sharpening up the original concepts.

While a robotic vacuum cleaner, Roomba, scrutinizes the exhibition space and generates sounds and visual events, a computerized tracking system attempts to capture the robot and lock it into a defined area, as in a sort of struggle between Spio and ‘the system’.

The position of the robotic vacuum cleaner in relation to the visitor’s presence affects the installation’s balance, resulting in unexpected responses from the robot, which derives his position and generates audio and visual interferences. As a system that is at the same time a sort of ‘ready-made object’ and a ‘surveillant’ device, it intends to produce ambiguity and misapprehension.

Spio was firstly presented at the exhibition Emoção Artificial 2.0 organised by Itaú Cultural in São Paulo, Brazil, in 2004. Since then, many artists have used the Roomba vacuum-cleaner in their projects making Spio a seminal work.

The version 2 is a new system, in which we changed its core hardware and software. We started to use a set of two Ubuntu Linux boxes (instead of two expensive Macs) and the free, open source Pure Data instead of proprietary Director. It resulted in a reliable system, working fine for years in countries such as Spain (Laboral), Argentina, Peru and Chile (Espacio Fundacion Telefonica). Apart from its premiere at Itau Cultural, it was previously exhibited in London, UK at http gallery, an artist’s space run by Furtherfields.

Lucas Bambozzi: You are right, my work deals with contexts. More than usual it also deals with site and social-specific conditions, which as I see, also point to how one could perceive the particularity of the context around, meaning its social, political and technological environment. In this sense the scientific/technological approach is not the driven motor but it plays a big role in shaping the context. Sure, it also does influence the research  behind the work. It would be risky to affirm that such research is the core of the work, but if we consider the research as a way to establish links between the social reality and the communicational/technological systems, I tend to agree with that. My background are more communication than art, the art I do is permeated with communication.

My pieces are not too different. More than often I use different media to point to the same point (problems or conflicts generated by the introduction of technologies in or society). So it is also not true that I am always looking for new things. I would rather say that I keep looking for the same things (let’s say: the media, mediating tools and communication systems). The problem or the fascinating thing, is that ‘these things’ are changing constantly. For me, to produce a work is not a theoretical strategy, but an observation process.

I think that some kind of work, specially those involving interactions, are never really finished by the time of its first presentation. This is different from all those assumptions that the public will shape the work as a participant (the co-authorship ideas). I would rather “learn” with the work when I meets the public and its related participations of how to improve it, by expanding or narrowing down its concepts. More in technical sense, my works always demand some tweaking care and I think this is related to the fact that we never have the ideal conditions (time + resources + technologies) for preparing it 100% before the due time to be presented. Among us Brazilians, this is usually considered a sort of syndrome, a typical Brazilian condition. But it does happen in other contexts as well, as some ‘new media’ works do demand some  kind of research that can not be conducted without proper support. In my case, even when the work is not being commissioned by the exhibition I took some exhibition’s opportunities as a way to further develop not only some ideas, but also some knowledge on hardware and software.

The museum/gallery space is not really the best place/environment to create, develop and test the work, but surely it can be the best place to tweak and fix the work, as in my case, it will be at the venue that the work will finally gain its ‘living’ condition, relating itself to the existing forces and specific conditions found in the space. However, more than often I have been trying to consider the public spaces as the place for such encounter.

So there are two things, sometimes being mixed up: the space itself, and the conditions proposed by the exhibitors – which would include available spaces. The first thing is more a conceptual issue and the latter is more related to production, financing issues.

In order to better deal with both, I am currently investing some money and time on a sort of atelier in São Paulo. I hope it will make it possible to work by my own, to build things independently from any invitation, without all that known pressure implied by an exhibition time-frame. With little exceptions, producers can help better when they are working for your work, not for the exhibition.

Talking specifically about the Spio project, it happened that it was related to an inverted situation. When it was produced and shown for the first time (2004), I wanted to point it directly to the growth of controlling devices and pervasive technologies such as the CCTV cameras, the introduction of RFID tags in ordinary products and the spread  of automated and generative systems. It was a way of proposing the discussion of the physical presence of surveillance devices embedded in daily life. However I used a device (Roomba, the robotic vacuum cleaner) that was already absorbed by the industry and commerce. iRobot, the company behind Roomba, was developed like this, with a trajectory rooted in MIT labs and soon gaining a big market in the USA, not only in domestic appliances but also in more ‘sophisticated’ applications that would lead to some controversy, such as military use.

Spio was also inspired by the Fluxus’ and Nam June Paik’s use of irony and humour so as to highlight the contradictions of their time. We notice in Nam June Paik’s works the simulation of high-end techniques with excessive visual effects treatment, with references to science’s utopias such as robots and impossible gears, as well as the use of toys, furniture, domestic appliances or strange engines. Spio refers to some of these approaches,

Funny enough, the Roomba vacuum cleaner has evoluted a lot in the last three years. It gained an operating system and a serial port, which allows different way of programming with C++, Mobile Processing, MacOSX or Linux, via Arduino or Wiring. So it has been recently used as a platform for hacking purposes, driving attention from researchers, artists and potential hackers, from mecatronics, engineering and art fields. There is a book released this year called Hacking Roomba: ExtremeTech (by Tod E. Kurt) that teaches step-by-step many hacking possibilities.

Spio is not listed in the book as a hacking project there, but it could be, as it was really a sort of pioneer project dealing with Roomba (most projects are from 2006/2007). The version being presented at Laboral will feature many possibilities that was not easy to implement in 2004, but will now be possible (the tracking cameras will trigger some responses on the robot itself), improving and sharpening up the original concepts.

So, answering your question: No, Spio could not be really applied to commercial field (ate least as a product), as it is exactly the opposite: to bring a product to a different purpose.

As a system that is at the same time a sort of ‘found object’ and a surveillant/surveilled device, it produces confusion and misapprehension. It interfaces ‘nothing with nothing’ and this void may produce strangeness about a device whose functions, tasks or parameters one does not know for sure. It can be seen less as a finished object and more as a hub of linking possibilities.

I do not think about it this way, as I think I do both. My two feature films for example, deal with the context (anachronistic situations lead by substitutions in the way people work, the instability of life in the borders) as a result of an approximation, as a consequence to be immersed on a chosen/desired/given environment I do believe that this way we can better understand the context, and by doing so we can improve our lives, by means of real communication.

So, what does it means to become context-dependent? Is it something to avoid?

What I am particularly interested in locative media is that these

systems are to be considered naturally immersed in the public environment, and for this reason it is expected that they would help to effectively improve the experience of public life, re-shaping social reality, at least with less mixophobia (a concept proposed by Bauman, as opposed to mixophilia – we already talked about that, remember?). Mobile apparatuses are spread in Brazil in such a big figure: more than 110 millions of registered mobile phones in use. And I am truly interested on the networking capabilities of this phenomenon. Mobile media can be used stupidly, but not only. Instead of just connecting private bubbles (in a one-to-one connectivity), it can potentially empower networking in an effective way, puncturing sealed private environments, broadening relationship to a richer experience. I do expect to see and produce more works dealing with these ideas, as the context it relates to, has been a challenge for us living in mega-cities like São Paulo, where the public spaces has been decreasing so drastically. Spio is still a model for a protected environment, but I am working on a couple of projects in which I want to see these edges widened.